The world economy has plunged into the deepest recession since the Great Depression of the 1930s. According to the International Monetary Fund (IMF), the global economy is set to shrink by 3% in the coming year. According to IMF economists, the COVID-19 crisis could result in a loss of over $ 9 trillion (£7.2 trillion) over the next two years.

For the UK, which was already in grips of a financial slowdown before the COVID-19 outbreak, this pandemic is bound to have far-reaching implications for the economy. The situation was dire, even before the lockdown. Three months into FY 2020, the UK economy had grown by a meager 0.1 %. According to the Office for National Statistics (ONS), the economy contracted by 0.1% during Feb alone.

The pandemic only made the situation worse. According to Bank of England officials, Britain’s economy may suffer the deepest economic recession in several hundred years. Notable economists  have already confirmed that the consequences of the current economic crisis in the UK will be much worse than those of the 2008 financial crisis.

Although we’re still in initial phases of this crisis and official economic data still has to catch up with the turn of events, economists are sure of one thing; this crisis is going to have a grave impact on the UK economy for years to come, just like the 2008 recession.

In this article, we will be comparing and contrasting the impactions of the 2008 Global Financial Crisis (GFC) with the current coronavirus recession.

Many people are comparing the present coronavirus recession to the 2008 GFC. There are some overarching commonalities the two crises have:

During the 2008 financial recession, the UK economy contracted by over 6% between the first financial quarter of 2008 and the second quarter of 2009. It took just over five consecutive quarters (18 months, also the longest period of economic decline since World War 2) of negative growth to move out of the recession. Our economy took over 5 years to get back to the size it was before the GFC.

The COVID-19 recession may hit the economy even more intensely. According to the Office for Budget Responsibility (OBR), the economy might contract by a record 35% by June, assuming there’s a three-month lockdown with three-months of partial restrictions. 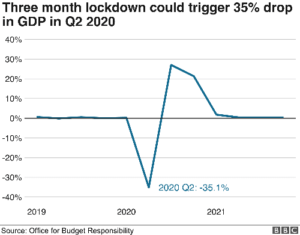 Under this scenario, the UK economy would shrink by 12.8% during this year. The OBR has made another startling revelation, additional strain on the economy caused by increased healthcare spending could consume 14% of UK’s GDP.

Even the IMF is predicting the sharpest economic drop of the century. The IMF estimates that the UK economy will contract by at least 6.5% in 2020. Another forecast from the National Institute of Economic Research has predicted that the UK GDP might shrink by 15-25% in the second quarter of FY 2020.

According to some economic experts, the COVID-19 recession could cause our economic output to plunge by over 15% in the second quarter of the year. For comparison’s sake, the 2008 GFC resulted in an output decline of 4%.

Even in this pandemic, as the government cuts development spending in the face of decreasing revenue and the private sector spins deeper into crisis, job cuts are becoming increasingly common in the UK. Data gathered by the ONS shows that 29% of businesses have already had to cut down on staff because of the pandemic. According to OBR estimates, over 2 million people could be jobless by June during the current recession. 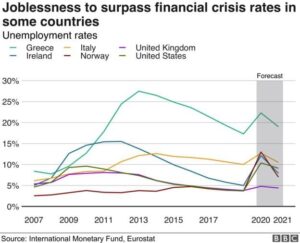 Earlier in April 2020, the UK government  revealed that it had received over 1.2 million claims for universal credit during the last few weeks. Normally, the government roughly receives only 55,000 applications a week. 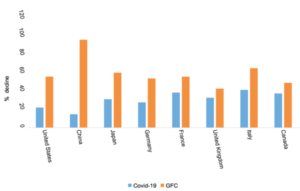 Both the GFC and the COVID-19 economic crisis may appear similar, but a closer look reveals many core differences with far-reaching implications:

The GFC was caused by the subprime mortgage crisis, which severely damaged the British banking sector. Against the backdrop of rising global commodity prices and stagnating real wages, the stock market shock proved too much for the global market to absorb. As a result, the UK economy spiraled into a deep recession that lasted 18 months.

The current economic crisis can be attributed to strict lockdown measures which have resulted in the closure of all non-essential businesses and a restriction on travel and gatherings across the UK. The COVID-19 lockdown can be understood as the immediate cause of this crisis. Other causes of the present crisis: the accumulation of corporate debt over the previous decade.